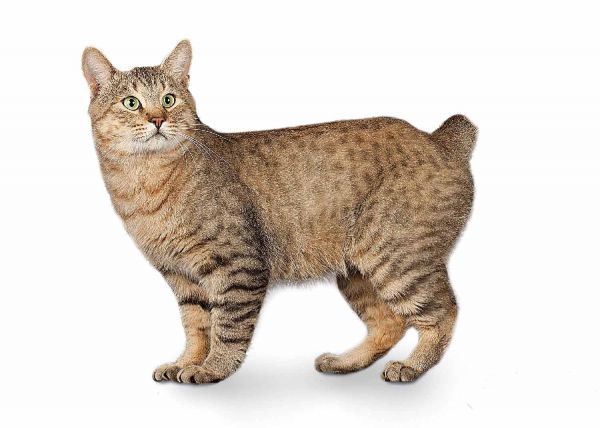 The American Bobtail has a wild look but not a wild temperament. This breed’s devoted, loving, and intelligent personality has earned them a loyal following. These confident, friendly cats bond emotionally with their families and are devoted companions that adapt quickly to most home environments. Not as vocal as breeds like the Siamese, Bobtails nevertheless are not shy about making their feelings known. Bobtails are playful, energetic, and friendly, and possess an uncanny intelligence for Houdini-type escapes from closed rooms and fastened doors. Very people-oriented, they may solicit attention from their family by meowing or commandeering available laps. On the cat activity scale, the Bobtail is fun-loving and frisky but not overactive. American Bobtails usually get along well with other cats and cat-friendly dogs if properly introduced. Instead of hiding under the bed, they are curious and outgoing when unfamiliar visitors come to call. If trained from an early age, they tend to be good travelers.

Until quite recently the American Bobtail received little attention, so many people are surprised to learn that this breed has been in North America since the 1960s. Because of their haphazard debut, however, the American Bobtail is just now beginning to come into their own. The original Bobtail was a short-tailed brown tabby male named Yodie, found at an Arizona motel, supposedly dropped off by a child from the nearby reservation. A couple found Yodie while they were vacationing at the motel. Yodie’s parents and ancestry were unknown, but rumor had it he was a bobcat/domestic cat hybrid because of his feral appearance and short, bobcat-like tail. While it’s possible for domestic cats to reproduce with bobcats (Felis rufus, an indigenous North American spotted cat closely related to the lynx), such hybrids, particularly the first generation males, would almost certainly be sterile. It’s more likely that Yodie’s short tail occurred as a spontaneous mutation within the domestic cat population. Charmed by Yodie’s friendly personality and short stub of a tail, the couple took him home with them. Once home, Yodie impregnated the family’s sealpoint Siamese (proving himself fertile and not half bobcat). This first litter contained some normal-tailed and some bobtailed kittens, suggesting the gene governing Yodie’s bobbed tail was dominant, since their Siamese had no history of short-tailed ancestors. Only one copy of a dominant gene was needed for the trait to appear in offspring. They chose the name American Bobtail for the breed. The original lines from Yodie and his descendants became inbred and unhealthy. The focus then became to make the breed more healthy and one that looked like Yodie: a large, feral-looking tabby with long hair and a bobbed tail. The healthier cats had a rounded brow from forehead to eye ridge, giving them the “hunting gaze” that enhances their feral look. The American Bobtail has been accepted by four North American associations. The new and improved American Bobtail comes in all colors, categories, and have a sweet deposition but the feral look of the bobcat. They have both long and short coats.

Physical Attributes
Body
Moderately long and substantial with a rectangular stance. Their chest is full and broad. They have slightly higher hips with prominent shoulder blades. They are often muscular and athletic in appearance.
Legs & Paws
In proportion to the body and of good length. Their paws large and round. Toe tufts may be seen in long-haired cats. They often have five toes in front and four in back.
Head
Broad modified wedge, in proportion to the body. Their cheekbones are apparent. In profile they have a slightly concave curve between their nose and their brow with good length between their brow and ears. Their brow distinctive, evidenced by a slightly rounded forehead to eye ridge.
Tail
Tail short, flexible and expressive; may be straight, slightly curved or kinked, or have bumps along length. Their tail tends to be broad at base, strong and substantial. Straighter tails exhibit fat pad at end of tail.
Ears
Medium; wide at base with slightly rounded tips, wide-set, upright with a slight outward tilt. Lighter colored thumbprints on the back of the ears may appear on all tabbies, including lynx points.
Coat
Eyes
Large, almost almond in shape; deep set; outside corner angled slightly upward towards the ears. Medium-wide apart. Distinctive brow above the eye creates a top line to the eye and produces the their natural hunting gaze. Their eye color can be copper, gold, yellow, or green; blue in bi-color/van, colorpoint, lynxpoint, or oddeyed white cats.
Color
These cats come in all colors and combination of colors. Their coat pattern sometimes enhance the natural wild appearance of this breed.